The Museum stands on what has, for thousands of years, been Wampanoag land. Archaeological evidence shows that generations of Wampanoag maintained home sites or seasonal camps atop the bluffs, gathering fish and shellfish from the Lagoon, water from nearby springs, and animals from the surrounding forests. English settlers began colonizing the area in the mid-1660s, buying up or squatting on the land, and soon forced the Wampanoag out. 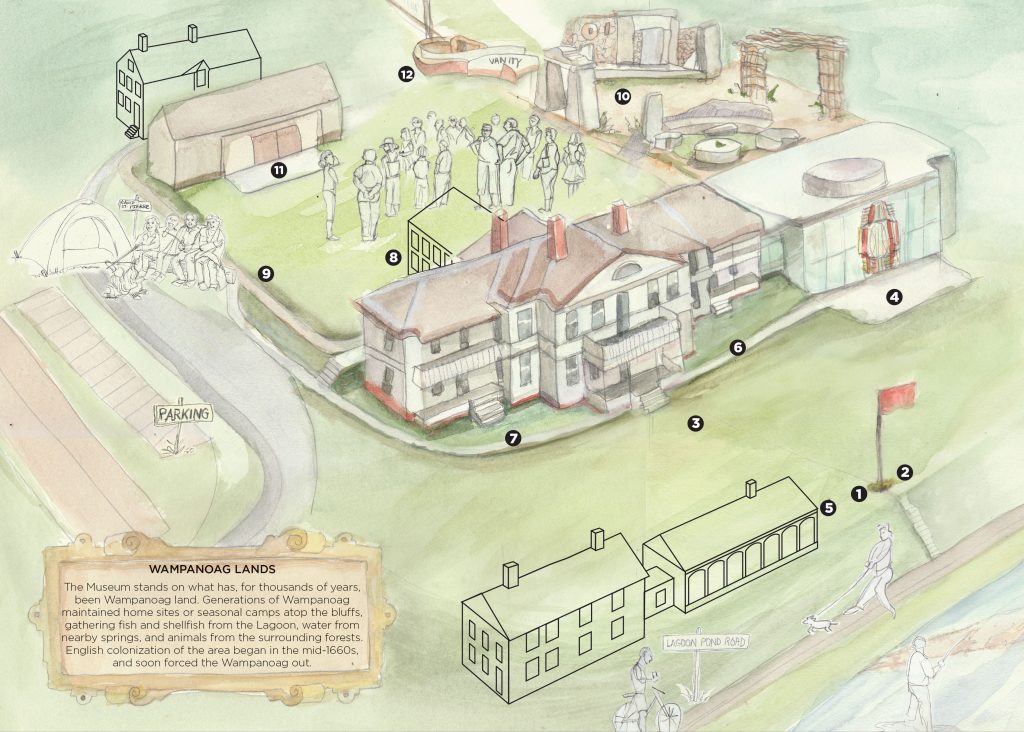 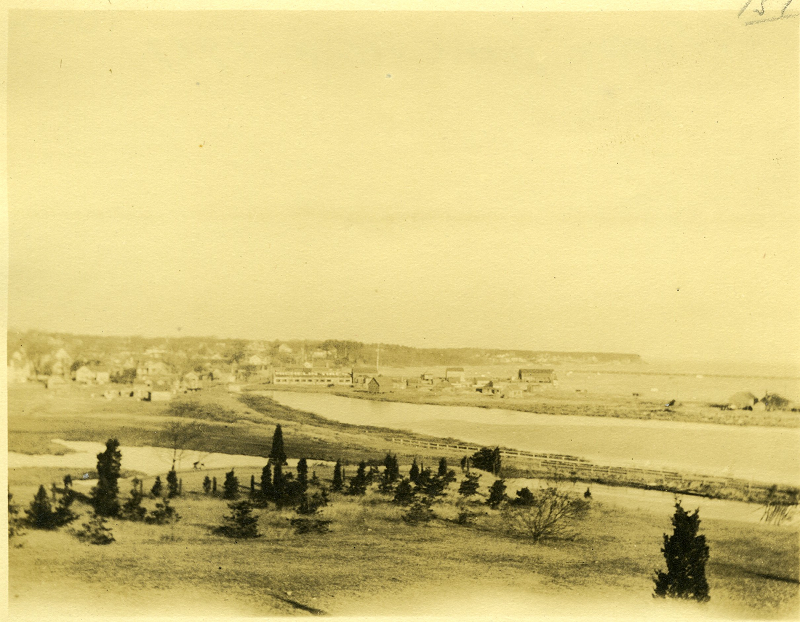 Look to your left. The shingled building with the bright red boat above the door stands on land that was once water. Bass Creek the channel connecting Lagoon Pond to Vineyard Haven Harbor, once stretched from the foot of this bluff to the current Steamship Authority docks. It was deliberately blocked, in 1835, at what is now Five Corners, and the Lagoon Pond end was filled a century later. 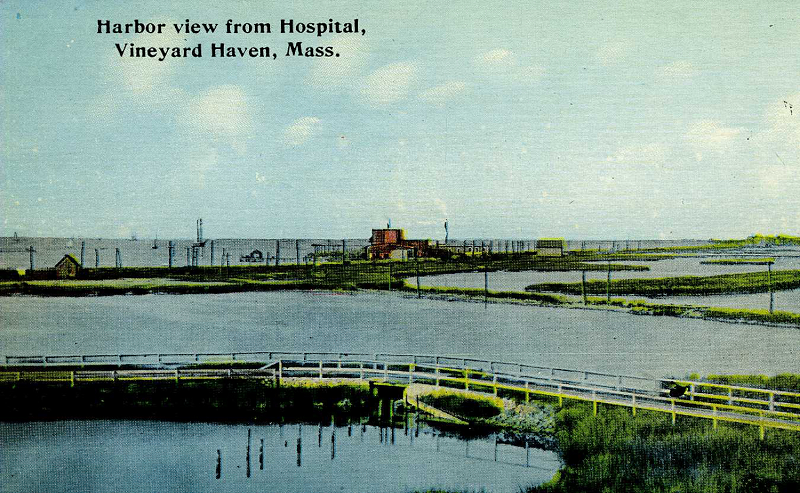 Look to your right. The long, straight, half-submerged structure in the water is the ruins of a causeway built in the early 1870s to connect Oak Bluffs to a new summer-resort development called “Oklahoma.” The resort went bankrupt and the causeway slowly crumbled. In 1945, Erford Burt made a channel through it to let boats reach his new boatyard (the shingled building with the red boat over the door).

Look down, and look closely. This compass rose is a reminder of the Island’s connections to the wider world. The eight ovals spaced around it indicate the directions and distances to places across the globe where Vineyarders went . . . and from which people came to the Vineyard. 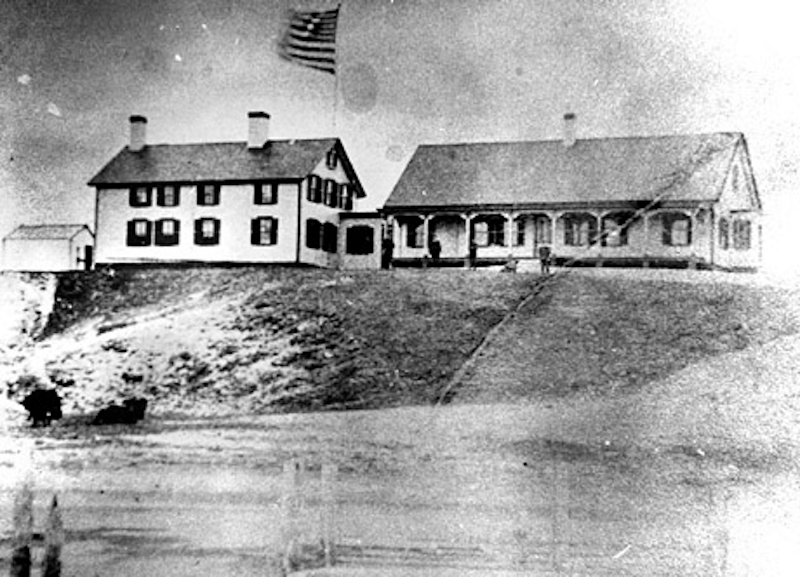 Look out to sea. Fifty thousand ships a year passed between Cape Cod and the Vineyard in the 1800s, and many stopped in Vineyard Haven. In 1855, the US government built a lighthouse—an actual house with a beacon on the roof—on this spot to guide them. It was shut down after a few years, and in 1879 reopened as a US Marine Hospital: the forerunner of the building behind you. 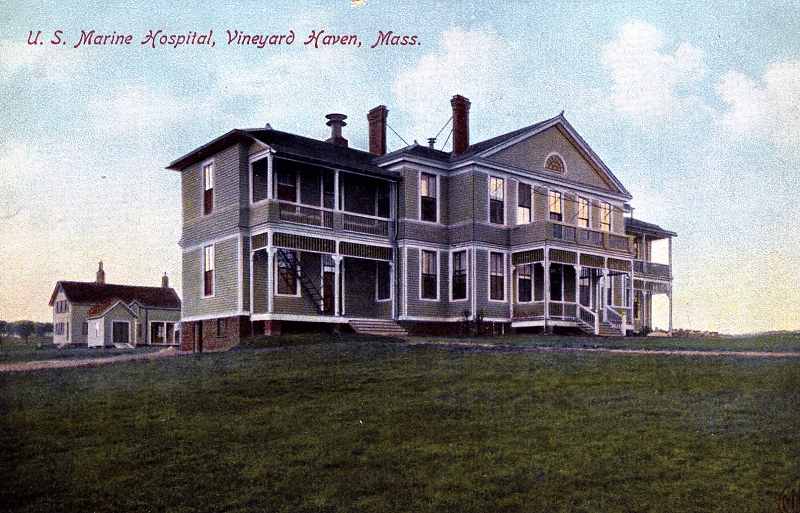 Look at the tall window in front of you. This US Marine Hospital building was built by the government in 1895 to treat sick and injured sailors. The room in front of you, the one above it, and the two at the other end of the building were 6-bed wards. They had porches, balconies, and large windows so that sunlight and fresh air could help the patients heal faster. 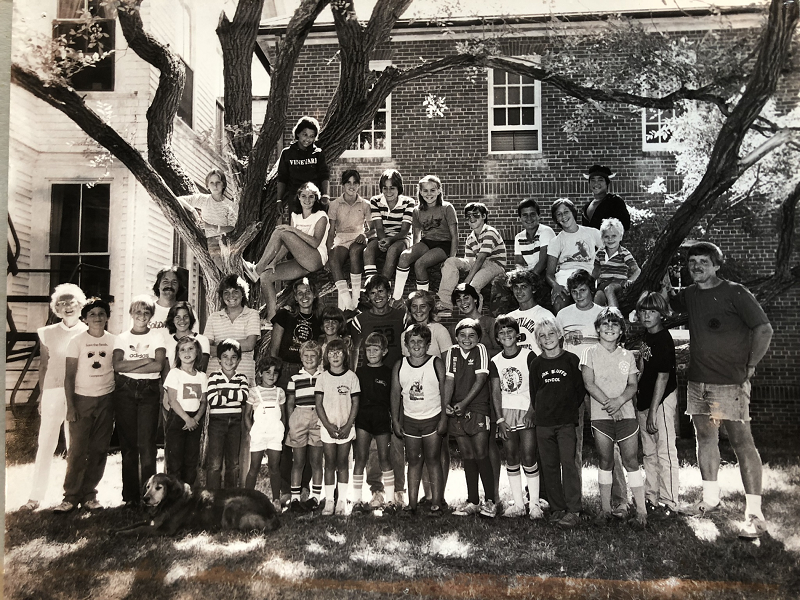 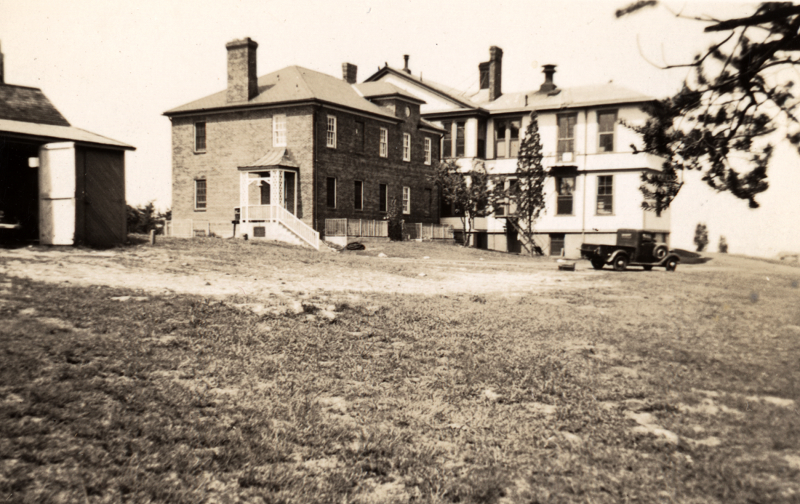 Look toward the Museum entrance. The 1895 Marine Hospital had a one-story rear wing attached to it where the Museum entryway is now. It was replaced, in 1938, by a two story brick wing (with an operating room and X-ray lab on the second floor) that was torn down when the building was turned into a museum. The wing was slightly off-center, so the entrance is, too. How can you tell?

Madeline Blakely Heath was born in 1923 and lived on the Vineyard most of her adult life. When she died, she left a bequest to South Mountain Company to create an educational demonstration about solar energy. They commissioned artist Tim Laursen to create this interactive kinetic sculpture to honor that request and celebrate her memory.

Created to honor poet and human-rights activist Rose Styron, a long-time seasonal resident of Vineyard Haven, this garden was built in 2019 by master stone mason Lew French. Its seating areas and nooks provide space for contemplation, conversation, and performances. Can you find a pair of iron pots (once used aboard a whaling ship), an old mill stone, and a chunk of black, silver-flecked Cumberlandite (found only in Rhode Island)? 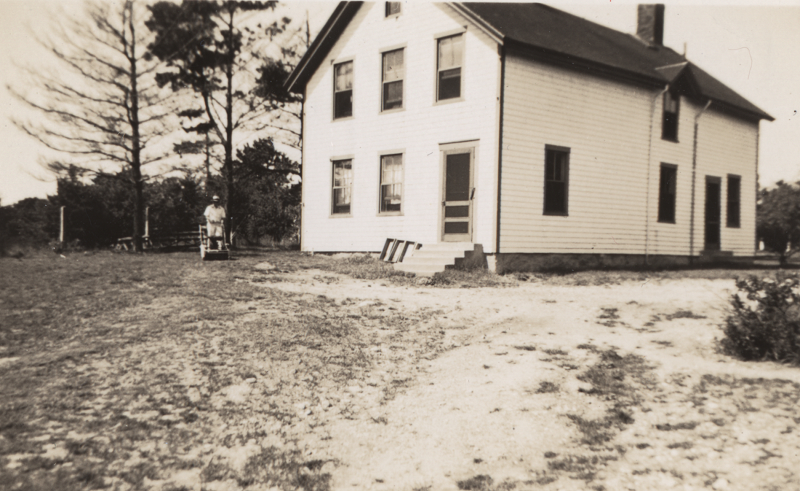 Look at the “barn.” This is Doherty Hall, an exhibit and program space built when the Marine Hospital was being transformed into a museum. When the 1895 Marine Hospital opened, the old lighthouse building (Site 4) was moved to the back of the property and used as a staff dormitory. An isolation ward, known to locals as the “pest house” stood nearby, in what’s now part of the parking area. 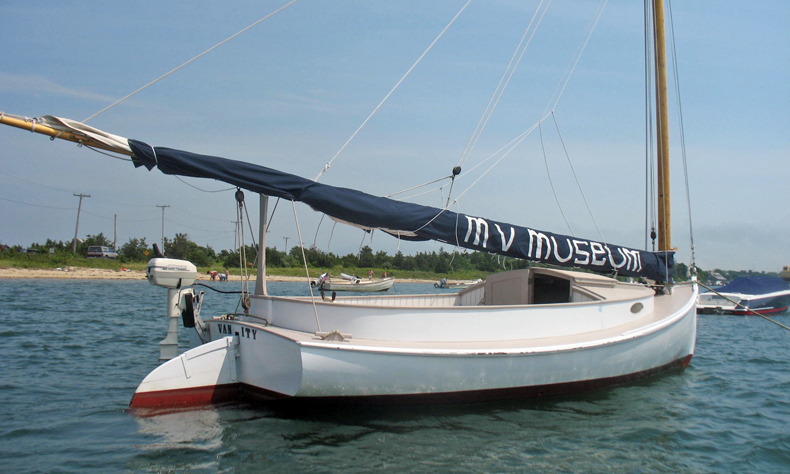 Designed by Edgartown boatbuilder Manuel Swartz Roberts and launched in 1929, Vanity is typical of the working catboats that filled the harbors of Cape Cod and the Islands from the 1840s to the 1930s. Captain Oscar C. Pease used her for decades of fishing, scalloping, and summer charters in the waters around Edgartown, then donated her to the Museum, which preserves her as a living piece of maritime history.