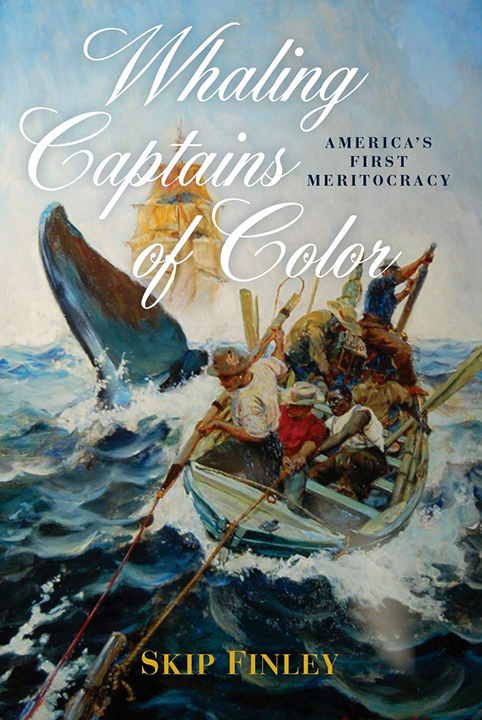 The history of whaling as an industry on this continent has been well-told in books, including some that have been bestsellers, but what hasn’t been told is the story of whaling’s leaders of color in an era when the only other option was slavery. Whaling was one of the first American industries to exhibit diversity. A man became a captain not because he was white or well connected, but because he knew how to kill a whale. Along the way, he could learn navigation and reading and writing. Whaling presented a tantalizing alternative to mainland life. Working with archival records at whaling museums, in libraries, from private archives and interviews with people whose ancestors were whaling masters, Finley culls stories from the lives of over 50 black whaling captains to create a portrait of what life was like for these leaders of color on the high seas.

Following the talk, Island based guitarist John FX O’Toole will play sea-themed favorites for those wishing to enjoy the summer evening and/or purchase autographed copies of the book.

Skip Finley
Skip Finley is a former broadcasting executive who was responsible for over 40 U.S. radio stations and experienced success in all areas of radio. Attempting retirement since age 50, he keeps returning to communications, currently in marketing at the Vineyard Gazette Media Group. He has summered on the Island since 1955, and now lives here year-round. For five years Finley wrote the weekly Oak Bluffs Town Column and is a contributor to several publications in the areas of whaling and history.

Dawn Davis
Since launching 37Ink, an imprint of Simon & Schuster, in April 2013, Dawn Davis has published Heads of the Colored People by Nafissa Thompson-Spires, Never Caught: The Washingtons’ Relentless Pursuit of Their Runaway Slave by Ona Judge, Heart Talk by Cleo Wade, and several New York Times bestsellers, including Tough Love by Susan Rice, The Butler: A Witness to History by Wil Haygood, The Misadventures of Awkward Black Girl by Issa Rae, and I Can’t Make This Up by Kevin Hart. For twelve years prior to joining S&S, she had been at HarperCollins, directing the Amistad imprint, where she published numerous well-known, highly acclaimed bestselling authors. She was named the 2019 Editor of the Year by Poets & Writers.

Guidelines for Attending:
This talk will take place outdoors in the Museum’s Bodman Courtyard. In the case of inclement weather, the event will be postponed. Tickets will go on sale on Wednesday, July 8th at 9am on the Museum’s website. If you do not have a ticket in advance, please do not come to the Museum on July 13th. Because of social distancing requirements, a limited number of tickets will be sold. The program will be taped and shared online after for those who don’t get tickets. Autographed books will be available for purchase following the talk. Masks are required to attend this program. An ADA accessible porta potty will be available for those needing restrooms, however, the Museum buildings will be inaccessible.

Tickets:
Museum members $15, Non-members $20. Tickets are sold out. We will share a video link of the program in the near future. Thank you for your interest!