The Jewelbox exhibit spotlights one thing – one story or one object. it gives visitors the opportunity to have a quiet, intimate moment with something from the MVM collection – an object that has a compelling story to tell, but perhaps hasn’t yet found its way into larger Museum exhibits. New acquisitions are often featured in this exhibit.

One Island, Many Stories
Now Open/On Display
The Aileen and Brian Roberts Gallery 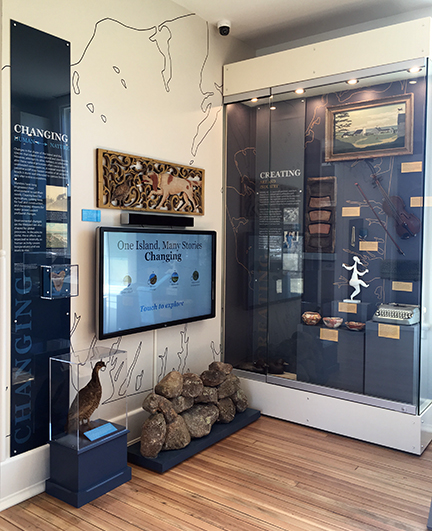 One Island, Many Stories offers an introduction to Island history arranged in a thematic way. Visitors are able to learn about the diverse history of Martha’s Vineyard through the lenses of fishing, farming, changing, voyaging, creating, escaping, and belonging. An interactive map is located in the center of the exhibit. All around, the sights and sounds are of the Vineyard; from an array of seagoing vessels and fishing gear suspended overhead, to segments of the stone walls that still serve as fences. Logbooks, scrimshaw, photographs, and travel trunks are among the objects representing the diversity of cultures and people who moved to the Island and made this place their home. Connectedness is implicit everywhere: connections from around the world and to the Island, connections between Wampanoag people and the land, settlers to the sea, and from one town to another. 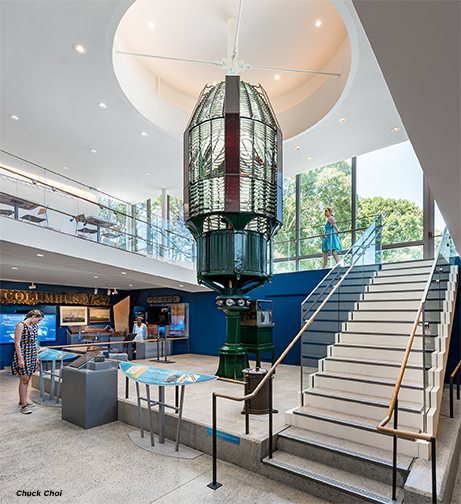 This exhibit chronicles the history of lighthouses on the Island diving into the details of the Gay Head Light in Aquinnah. Set in the midst of this space, and spanning two floors like a suspended jewel, is the magnificent first-order Fresnel Lens, which was first installed in the Gay Head Light from 1854 to 1952. Around the Lens, the exhibit explores the geology of the region and the resultant landscape of its coastal edges, the changing land, and navigation with the aid of lighthouses. 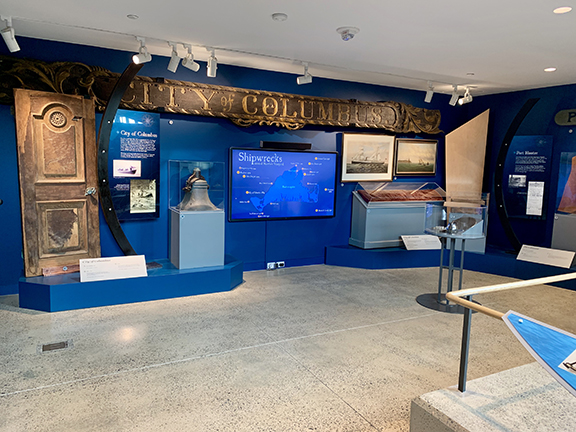 This exhibit explores the stories associated with shipping and navigation, lifesaving, and weather in Vineyard and Nantucket Sounds, the second-busiest waterways in the world in the 19th century. On display are sextants, chronometers, celestial bodies, and charts, as well as artifacts from local shipwrecks such as the steamer City of Columbus, which wrecked in 1883. From its location in the lower level of the Linnemann Pavilion, this exhibit also demonstrate the optical qualities of the 1854 Fresnel Lens with its 1,000-plus hand-cut crystal prisms and offers an explanation around the mechanics of how the Lens operates. 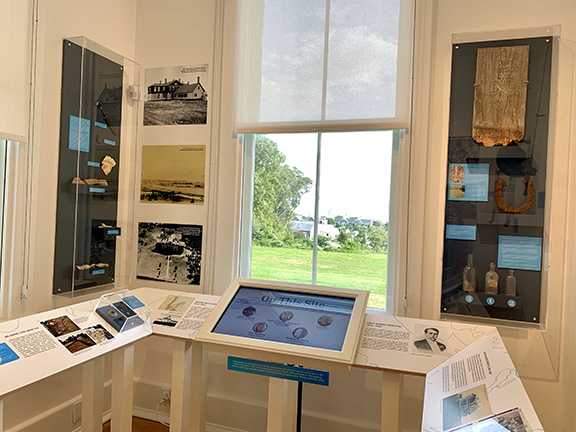 This exhibit chronicles the historical significance of the site that the Museum sits on. Did you know a lighthouse once existed on the front terrace? In 1895, the Coast Guard ordered the construction of a Marine Hospital on the property later adding onto it in 1938. Hear oral histories from some of the patients and nurses who spent time there. Finally, before the Museum purchased the property in 2011, the site was owned by the St. Pierre family operating the St. Pierre School of Sport, a camp that many Island kids visited every summer. Hear some of the memories of the campers who called this campus home during their childhood summers. 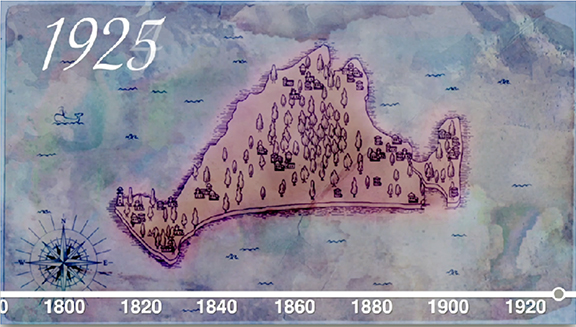 This gallery presents a brief animated program that introduces the Island’s timeline, from prehistory to present day. It is meant to provide context to visitors and an overview of Island history before they explore the other permanent and rotating galleries in the Museum. The featured video is updated frequently with new historical events, so be sure to check back for added content on subsequent visits.

Doherty Hall is home to some of the larger objects in the Museum’s collection. Located inside are a number of whaling and fishing vessels, the original hearse from the town of Edgartown, the Mayhew peddler’s cart used for deliveries at Alley’s General Store, a Hawaiian canoe, surfboards, an Erford Burt kayak, the headlamp for the island’s locomotive, the Active, and much more. This large exhibit offers interpretation of many of the objects in the space, but should you have unanswered questions, please take a photo and post it on social media with the hashtag #mvmwhatisit and our curatorial team will be happy to answer! 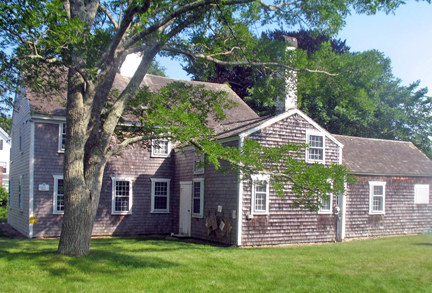 Temple Phillips Cooke, who was one of the island’s earliest attorney’s, built the Cooke House between 1720 and 1740 at its present location. He and his wife Jane Dagget had five children, one of whom was Thomas Cooke. Thomas married Abigail Coffin in 1763 and lived for some time in the Cooke House. Like his father, Thomas Cooke was an attorney and would later become the Customs Officer for Edgartown Harbor. One of Thomas and Abigail’s sons, Thomas Cooke Jr., also became a Customs Officer and reportedly had his Customs Office in the front upstairs room of the house. At the time, there were fewer trees and houses, and he was able to see right down to the harbor. Eliza Cooke was the last member of the family to live in the house. She was born in Edgartown in 1792 and lived there until she was married in 1816. Upon the death of Thomas Cooke Jr. in 1820, the house was willed to one of his sons and eventually sold out of the family in 1853.

To learn more about the Museum’s plans for the Cooke House, click here.